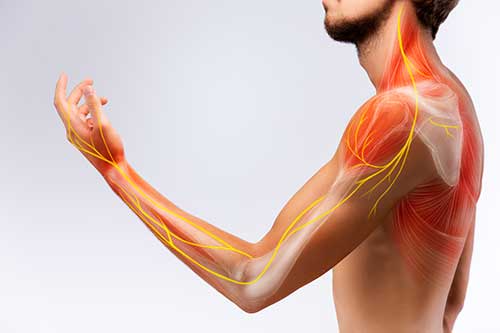 Many of us have experienced severe burning, numbness, and tingling after hitting our “funny bone.” This is caused by trauma to the ulnar nerve at the elbow. Similar discomfort may be brought on by sleeping on an arm or leg in a funny position.

The brain and spinal cord are considered the Central Nervous System. Incoming and outgoing information travel in the nerves of the arm similar to a telephone wire. These nerves are considered the Peripheral Nervous System. Information regarding the environment such as hot, cold, and the position of our pen are carried on sensory nerves. Motor nerves carry bioelectrical information to muscle, resulting in contraction and movement.

The perception of pain varies with each individual; terms such as stabbing, prickling, burning, tingling, and other descriptions have been used. Nerve pain is difficult to live with but in most individuals, it can be reduced. Nerve pain is also called neuropathic pain.